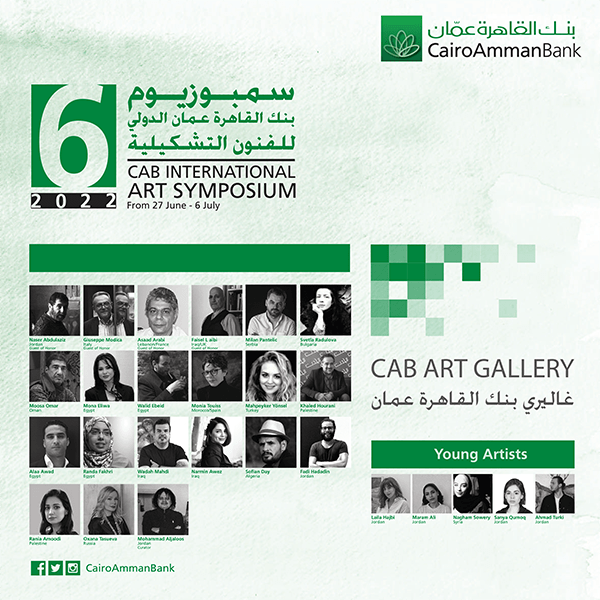 As in every session, the Symposium, which is held under the supervision of the Bank’s Gallery, the Bank’s artistic arm, attracts famous professional artists, academics, and art critics from around the world, in addition to the participation of a number of talented young artists, in order to allow them to enrich their experience and gain expertise from professional artists.

This year’s 2022 round will be attended by artists: Faisal Laibi / Iraq, Britain, Asaad Orabi / Lebanon, France, Giuseppe Modica / Italy (President of the Academy of Painting in Rome), and Nasr Abdel Aziz / Jordan, guests of honor.

The sixth round of the Cairo Amman Bank International Symposium for Arts is being held, according to the organizers’ speech this year, after humanity went through a global ordeal, the Corona epidemic, which left its dark shadows on all walks of life, changed many ways of social life, and was negatively reflected in culture and arts, and during these years in the past, Cairo Amman Bank Gallery had an active role in enriching the Jordanian art movement, which is the gift that the bank wanted to contribute to the Jordanian cultural and artistic movement as a leading economic institution, whom its successful activity in the field of economy did not stop, but it went beyond it to the depth of social life. By launching this visual window, it remarked a social responsibility that is recorded for it in the history of Jordan, and the nature of the role it plays as an Arab economic institution in general, and its contribution to the society and building its future.

The sixth session comes to dedicate the international drawing workshop as one of the most prominent artistic events not only at the Arab level but also at the global level. In its previous sessions, the Symposium hosted a number of the most prominent Arab and international names and emphasized a high level of professionalism in the organization until it became referred to and mentioned in many forums and worldwide.

The gallery did not stop at attracting professional and world-renowned names in the field of arts only, but also included the children, youth, and people with special needs, as well as international experiences. The gallery organizes the Cairo Amman Bank competition for children’s drawings in its twelfth session, which was held this year, and which the children of Jordan are waiting for every year to present their creations in addition to the annual exhibition held for seven young people, which later became famous in the Arab world and internationally.

This summer, the Symposium will allow art lovers in Jordan to learn about new artistic experiences and shed light on Arab, international, and local art.

In addition, the Cairo Amman Bank International Symposium for Arts has become one of the most famous art forums in the Jordanian, Arab and international scenes, due to the gravity of the event, the participants’ experiences, and the rich artistic programs of the forum, which culminates in an international art exhibition.